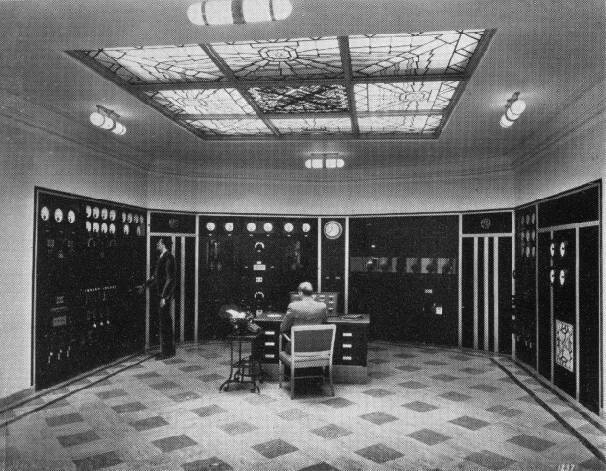 This is a photo, from about 1935, of the RCA-50B 50 kW AM Broadcast Transmitter installed at station KOA in Denver. The RCA-50B Transmitter was installed by many Class 1A 50 kW clear channel stations during radios golden age in the 1930's. NBC's owned and operated stations in Chicago, Denver, New York, and San Francisco, all used the RCA-50B transmitter. NBC's RCA-50B transmitters, installed in the 1930's, remained in service until they were replaced in the early 1960's. The 50B transmitters were manufactured for RCA by the General Electric Company, and the Westinghouse Electric and Manufacturing Company. An article describing the RCA-50B Transmitter can be found in the October 1930 issue of the Proceedings of the Institute of Radio Engineers titled, "Some Developments In Broadcast Transmitters". The 50B transmitter consisted of a 50 kW linear amplifier using two water cooled UV-862 tubes in a push pull circuit, which was driven by an RCA-5B 5 kW transmitter. As can be seen in the photo of the 50B installed at KOA, the 50B consisted of 4 main units. The panels in the left side wall are the 5 kW driver transmitter. The panel on the left side of the rear wall is the 50 kW linear amplifier, while the panel on the right side of the rear wall is the main rectifier. The control panel is on the right side wall. 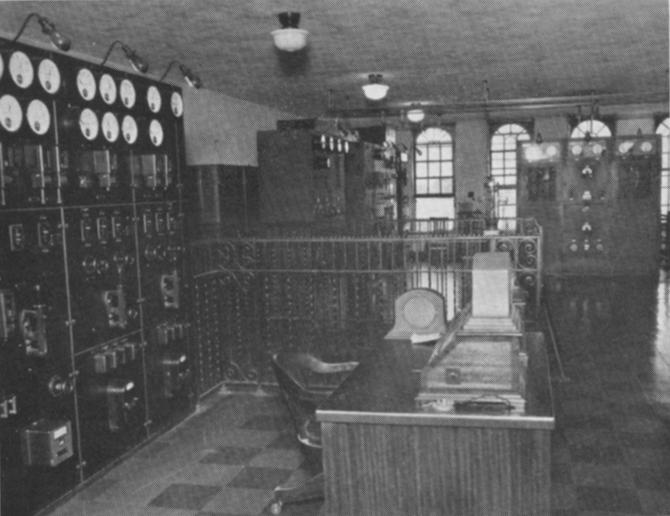 This is the RCA-50B transmitter at WENR in Chicago as it appeared in a 1932 photo. The 50 kW linear amplifier of the 50B appears at the right rear, while the control equipment for the transmitters appears to the left in the photo. WENR's RCA-50B was later replaced by a new RCA-50D, and WENR's old 50B was moved to WEAF's new Port Washington site in 1940. 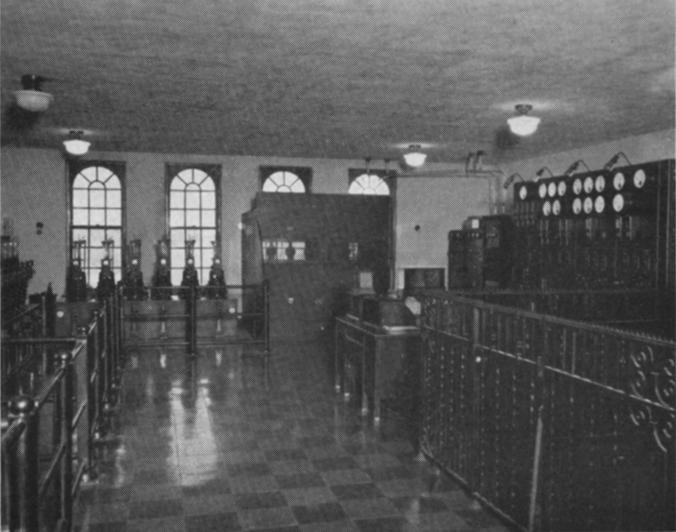 The Rectifier for the WENR 50B is at the center rear in this 1932 photo. An older transmitter of open construction appears behind the railing on the left, and in the rear of the photo adjacent to the rectifier for the 50B. 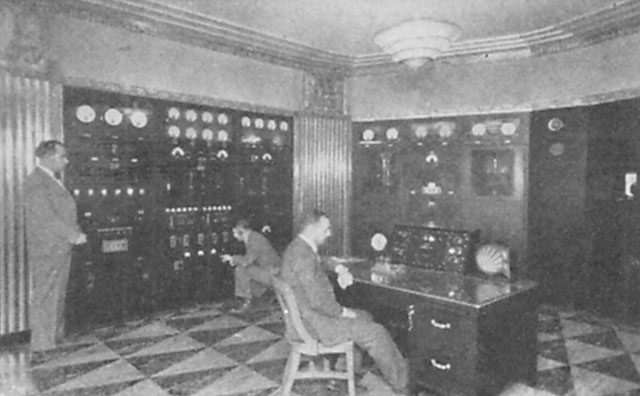 This 1932 photo shows WEAF's first RCA-50B transmitter which was installed at Bellmore Long Island. This transmitter remained behind at Bellmore to maintain continuity of service while WEAF moved to their new Port Washington Long Island site in 1940.

This 1940 photo shows the old WENR RCA-50B 50 kW AM Broadcast Transmitter as it looked after it was installed at WEAF's new Port Washington site in 1940. It can be seen that WEAF's "new" RCA-50B has been dressed up with stylish modern trim. Only the 50 kW linear amplifier and rectifier were moved from Chicago to New York. WEAF used an existing spare 5 kW transmitter, with extensive modifications, to drive the 50 kW amplifier. Over the years most 50B transmitters underwent similar modifications to upgrade their performance. The control panel was installed between the 50 kW linear amplifier and the main rectifier, rather than the typical location to the right of the main rectifier. NBC eventually changed the call letters of station WEAF to WNBC. To see how RCA and NBC converted WNBC's RCA-50B transmitter for AM Stereo operation in 1959, Click Here 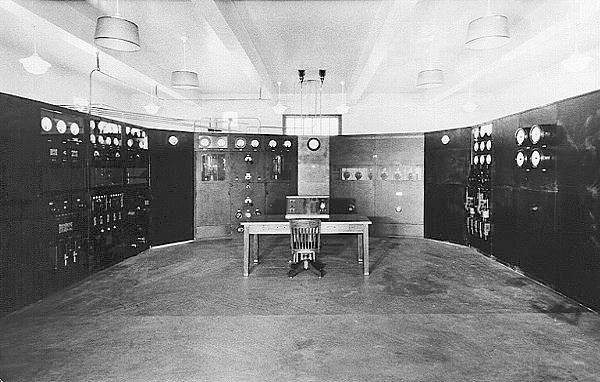 This is the RCA-50B 50 kW AM Broadcast Transmitter installed at station KPO in San Francisco. As can be seen, KPO's installation of the 50B is very similar to that at KOA.

This is the first RCA 50B which was installed in 1929 at WTIC of Hartford. It was known by RCA engineers as "Number One" of its type, and was the first high power commercial transmitter to use 100-kilowatt tubes, the first to use mercury-vapor type rectifiers throughout, and the first capable of 100 percent modulation of its full rated 50-kilowatt carrier output. Notice the RCA logo on the main rectifier cabinet in this 1930 photo. 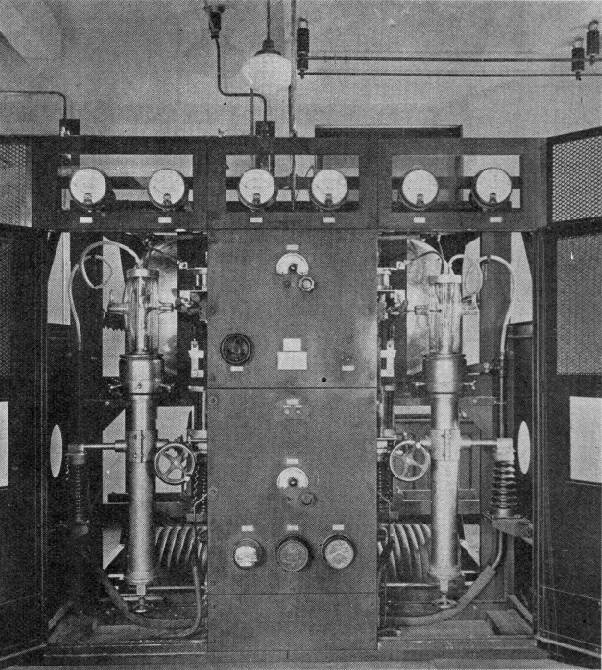 This is a view of the 50 kW linear amplifier cabinet for WTIC's "Number One", with the doors open to show the two water cooled UV-862 tubes. 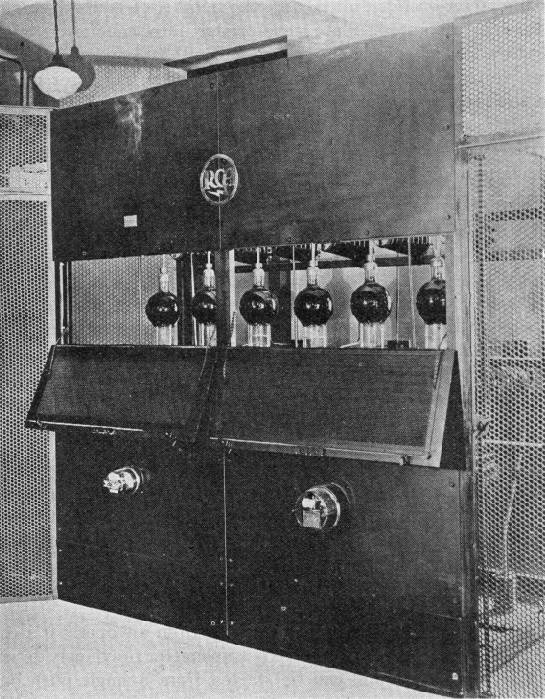 This is a close-up view of the Main Rectifier cabinet for WTIC's "Number One" 50B Transmitter, showing the RCA logo.

Thanks to John Schneider for the photo of KPO's RCA 50B Transmitter. You can learn more about the history of KPO on John's web page:
Belmont Visit.


Thanks to Jim Hawkins for the photo of WEAF's first RCA 50B Transmitter. You can learn more about WEAF's successor on Jim's web page:
WCBS/WFAN Transmitter Tour.